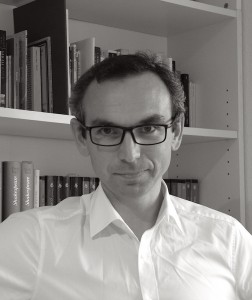 Michael Sommer stems from Kassel in Hessen, Germany. He started his university education in Freiburg with English, German and Art History as subjects and in 2002 completed a Master of Philosophy course in European Literature at Oxford University as a Rhodes Scholar. From 2003 until 2014 he worked at the municipal theatre of Ulm in Southern Germany, starting out as an assistant director, continuing as dramaturg from 2006 onwards and as executive dramaturg from 2011 till 2014. Since 2005 he has also been working as dramatist and director. In his work, he explores three main topics: the use of new media as instruments for the theatre // the mutual benefit of science and art in fact-based theatre // grounding theatre in community based and participative projects.

Everybody talks about it, few actually do it: Live streaming of theatre performances. As the only municipal theatre world wide, Theater Ulm is regularly broadcasting performances of plays, opera and dance via the Internet. The idea and implementation of the project was Michael Sommer’s; he organised and managed test broadcasts since 2011 and the ongoing project since 2013. The special achievement of this project is the fact that it is both high quality and affordable; even dramaturgs can handle it. The project was launched with interactive features (a chat module underneath the player) and special events (public screening of a broadcast on the Ulm cathedral square etc.). After exploring live streaming as a tool of audience development, the next logical step was to look into live streaming as artistic instrument on stage. In 2013, Michael Sommer started planning an interlinked theatre performance in which several geographically separated stages would be connected via video conferences, thus expanding a local theatre space into a global dimension. The project REFUGIUM which was presented 2014/2015 at Theater Ulm was based on this concept, although at this time, it was not possible to find three international partners. Still, a contact to the Greek author and director Yannis Kalavrianos was established with whom Michael Sommer first conceived PHONE HOME. REFUGIUM, which tells the story of a fictional company specialised in trafficking with ethical standards using Skype-conversations, is available in English. // Further projects involving new media were the development of two augmented reality smartphone apps for Theater Ulm and Ulmer Donaufest 2014, in cooperation with the Institute of Neural Information Processing of Ulm University. // In January 2015 Michael Sommer started the YouTube channel SOMMER’S WORLD LITERATURE TO GO. On the channel, he presents a ten minute version of one play or novel of world literature per week using Playmobil figures. Since summer 2015, the channel is cooperating with the publishing house Reclam.

Most of the theatre plays Michael Sommer has written in the last ten years, are fact based on historical subjects or material from other branches of science. In three works for the Federseemuseum Bad Buchau he developed and refined the genre ArchaeoTheatre in which archaeological topics and eras were conveyed through dramatic stories with audience participation (FISCHERGLUECK UND BIRKENPECH, 2007; FEDERSEELEN, 2009; KRONOS TRAVELS, 2013). // The starting point for working on historical subjects was a cooperation with Stephan Suschke on ROMMEL – EIN DEUTSCHER GENERAL in 2012. The play focused on the ambivalent figure of the National Socialist field marshal Erwin Rommel, who was forced to commit suicide in a village near Ulm in 1944 and confronted this “war hero” with the fate of elderly Jewish people who had been living in Rommel’s villa before his family moved in. As a literary pre-text, Heinrich von Kleist’s PRINZ FRIEDRICH VON HOMBURG was used.

In ANTIGONE/SOPHIE (2013) the story of the resistance activist Sophie Scholl was intertwined with the fate of her mythological forerunner Antigone. This fusion of a historical and a mythological figure was done from the perspective of a contemporary young woman who suffers from a mental condition as a consequence of her futile attempts to improve the world. Both productions were realised in cooperation with the Documentation Centre for National Socialism in Ulm and created national media interest. // In 2010, Michael Sommer developed NUTTERS as a play for young people dealing with mental health and the special perspective of children of mentally ill parents. This “musical shock therapy” told the story of the daughter of a bipolar mother, provided basic information about mental health and served as occasion to talk about this important topic of health education. In 2011, NUTTERS was awarded the “Grosser Präventionspreis Baden-Württemberg”; 35 performances of the play were presented in the following four years. In 2015, a new project with the title GEBRAUCHSANLEITUNG FUER ELTERN UND ANDERE PSYCHOS (“Instruction manual for parents and other psychos”) was developed and first performed at the Pasinger Fabrik in Munich in October. This crossover collage of theatre formats deals once more with mental health and how to handle them.

In 2012, Michael Sommer began a cooperation with the vicar of Ulm prison, Martin Krauss, which resulted in a production of Georg Buechner’s WOYZECK with inmates of this prison in 2013. The artistic intensity and high personal relevance for the participants made this production a decisive experience for the director that led to further participative projects. // Cooperating with the dramatist Nina Ender and the actor Stephan Kolosko, Michael Sommer conducted a children’s project called TULMULT in summer 2013. For two weeks during the open air season of Theater Ulm on the Ulm fortress Wilhelmsburg, children were invited to build, play and live in a “city of children”. This crossover between adventure playground and theatre was supported by the Stiftung Kinderland Baden-Wuerttemberg. // While this project was programmatically process oriented, the following ANDERSSEIN/RENT A FOOL combined a research and production part systematically. This project, initiated and managed by Michael Sommer and supported by the Innofation Fund Baden-Wuerttemberg, brought together 40 participants with and without handicap from amateur and professional theatre. After half a year of artistic research in the form of urban interventions the development of the play RENT A FOOL followed, in which the ideology of performance in economy and our society’s obsession with productivity was thematised. The play was written by Michael Sommer and directed by Eva Ellerkamp in Theater Ulm. // As a result of this project, and in continuation of the long term work relationship with Eva Ellerkamp an integrative theatre, HEYOKA THEATER ULM, was founded in March 2015. Michael Sommer forms part of the creative team of Heyoka Theater.

The artistic development and areas of interest that have been outlined above converge in the international theatre project PHONE HOME. In October 2015, the artistic research for this project started in the form of participative theatre workshops for refugees and non-refugees, in which topics and forms of intercultural communication regarding migration are explored. The result of this research are not intended to be “material” or “products” but rather experience in overcoming cultural and linguistic borders in a creative process. // By developing an interlinked theatre performance in which three stages in London, Munich and Athens are performing simultaneously and interconnected via video conferences, PHONE HOME develops a model for functionalising live streaming and other media on stage. The project seemlessly continues the media projects of Michael Sommer. // The fact that the project is accompanied by theatre studies scientist Dr. Gero Toegl and students in the form of a course in summer 2015 will Michael Sommer’s cooperation with scientists and scholars. It ensures a different perspective on the project and its content, thereby contributing to the quality of artistic results.

PRODUCTIONS AS A DIRECTOR (Selection)

This site uses Akismet to reduce spam. Learn how your comment data is processed.

All the World Literature to go